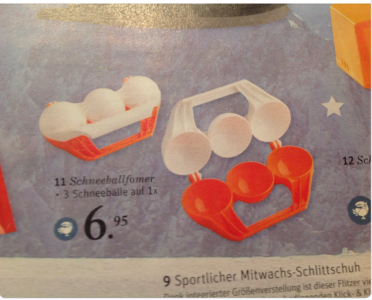 From a post by Sandra Schön: ‘Things the world does not need’

The item depicted is a snowball former – they come in different varieties, but have one thing in common: Beyond the profit margin for the company, this product adds no value to the world. Instead, it inserts an extraneous piece of plastic into child’s play that wastes limited resources in its production and will end up in a landfill where it contributes to pollution for the next 450 years.

And yet, it may have been the result of a value-oriented design process. Let’s imagine the process starting with the following problem statement: Children do not play enough outside. Brainstorming reveals several reasons that keep children from playing outside: Lack of access to safe outside play spaces, overly cautious parents, inclement weather, lack of motivation. The design team decides to focus on weather and motivation using the persona of a child who lives in a cold region. Why does little Jojo spend so much time inside? It’s too cold. How might we entice him to brace the cold weather? A snowball fight! But oh, there’s a problem: Little Jojo’s hands get too cold. The team ideates and prototypes. At last, they come up with a great solution. The snowball former.

Obviously, I do not know if this is the genesis of this product design, and very likely it isn’t. The important part is that in design thinking we can come up with terrible ideas that are extremely creative. This often happens when we use creativity to have fun – or simply less work – in the design process by turning a complex problem into an easy one.

A decade ago, families in North Carolina were subject to a campaign to stop the consumption of whole milk by children and expectant mothers. The problem statement: Childhood obesity is raging in North Carolina. The approach: Let’s use ‘thinking outside the box’. Brainstorming reveals that (almost) all children drink milk. The creative idea: If we take the fat out of milk, we can reduce childhood obesity – and if we keep expectant mothers from drinking whole milk, we can lower birth weights. However, there is no evidence that drinking skim milk will result in weight loss. There is, in fact, some evidence to the contrary.

If you think about innovative, yet value-free or value-negative technology design, the Apple dongle comes to mind. It is an example of designers solving a problem that users did not have before they created it.

Do design thinkers use creative problem-solving to avoid complexity and operate in an evidence-free environment? In some cases the answer is yes, but this is certainly not inherent to the design thinking method. Quite the opposite, producing ideas in abundance is thought to foster a mindset that makes letting go of ideas not just easier, but a habit.

As designers, we need to try to address complex challenges and create value by solving the most pressing problems, not ones that we think of as low-hanging fruits. Solutions need to be grounded in evidence, not imagination or wishful thinking. If we are led by creative follies we end up designing trash, sometimes literally.